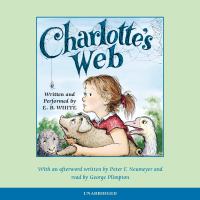 Some Pig. Humble. Radiant. These are the words in Charlotte's Web, high up in Zuckerman's barn. Charlotte's spiderweb tells of her feelings for a little pig named Wilbur, who simply wants a friend. They also express the love of a girl named Fern, who saved Wilbur's life when he was born the runt of his litter.
Publisher: New York : Listening Library : Random House, [2011], 1́970.
Edition: Unabridged.
ISBN: 9780807208526
Branch Call Number: J AUD WHITE
Characteristics: 3 audio discs (3 hr., 38 min.) : digital ; 4 3/4 in.

This is a very touching book. The dynamic of being close Fern out growing her attachment towards Wilbur being shown in a neutral/positive manner, not judgementally and the gentleness of how the topic of death is discussed is beautiful. If you have only read Stuart Little by the author and disliked it (my case), do give this one a try, it's a family favorite!

Charlotte’s Web is more of a pre-teen book or a tween book. A girl named Fern raises a pig named Wilbur. Now he is raised as a barn pig and he meets a spider named Charlotte. Charlotte tried to figure out a way to save him from being chopped up. I really recommend this story because the perspective is in the spider/pig. I would have thought the story is in perspective of Fern. In the perspective of the animals it’s so much more interesting. Although I would like to think of Wilbur and Charlotte as symbolism of us humans. In the perspectives of these 2 characters it can be shown that they show human characteristics. They have emotions and ideals as complex as humans do. I don't know if the author's main purpose was this but this is the way I analyze this book.

As I have started to introduce my 6 year old son to chapter books many honestly did not hold up. This one however was a huge success, and was the first we read when he was age 5.
A sweet story of friendship.
The play away was a nice way to engage him in a book without having to read it to him - best part, no screen ;)

Wilbur is a cute little pig who was just a baby when Fern, a human girl, saved his life. From then on Wilbur has lived in a barn. The only thing he can look forward to is waiting for Fern to come to visit him. His life is uneventful and boring until an unexpected friendship sparks between Wilbur and Charlotte, a barn spider.

This book is about friendship, trust, and doing the impossible. It’s a great book with an important message that is suitable for young readers.

4 1/2-5 stars. This was my very favourite book of childhood and I read it again and again. I recently treated myself to a new copy and settled in to read it as an older adult and found it a lovely read with a lot of insight into how to get along in the world. Wilbur is a pig, adopted by Fern, who soon discovers what his destiny in life is and is horrified. His friend Charlotte the spider helps him avoid his inevitable demise by spinning webs with words like "some pig", "terrific" and the farmer notices and the people in the area notice and Wilbur becomes quite famous. It's also about Fern, a little girl who loves animals and who hears what they say to her. I thought this was a lovely book and it still has a place in my heart.

A perfect story. Whereas White’s first work, Stuart Little, is more of a collection of vignettes; Charlotte’s Web is a consistent and masterfully crafted narrative. Returning to this work as an adult was delightful, if heartbreaking. White’s superb proficiency with the English language delivers his observations on our existence in an efficient and powerful manner.

A gem on every page.

Charlotte's sage advice to Wilbur: "I want you to get plenty of sleep, and stop worrying! Never hurry and never worry...Keep fit and don't lose your nerve."

The goose's retort upon being congratulated for hatching seven goslings: "Luck had nothing to do with this...It was good management and hard work."

"Life is always a rich and steady time when you are waiting for something to happen..."

"You're my best friend, and I think you're sensational."

Re-reading this little book was the perfect way to spend a sunny afternoon outside.

The story is touching and even rather sad; it deals with death tenderly. I thought that the writing included too many American vulgarisms. This audiobook was read by the author: it wasn't very good.

This is the first book I read on November 4th,2018 after watching the Great American Read on PBS.

suzicromie thinks this title is suitable for 4 years and under

stinkpot thinks this title is suitable for 4 years and over

green_alligator_7285 thinks this title is suitable for 7 years and over

green_hawk_418 thinks this title is suitable for 8 years and over

chloe1ab thinks this title is suitable for All Ages

sonialal thinks this title is suitable for 7 years and over

EveNathaus thinks this title is suitable for 7 years and over

Red_Wolf_23 thinks this title is suitable for 4 years and over

Wilbur is a pig with lots of talent, owned by Mr. Zuckerman, but as we all know, pigs get killed for meat, and it is up to Charlotte and Templeton to save him!

The novel tells the story of a pig named Wilbur and his friendship with a barn spider named Charlotte and other animals on the farm.

'Charlotte's Web' is a story which deals with the strong friendship that breaks the barrier between two very unrelated species, a spider and a pig.
One day a small and week pig was born. He's Wilbur. MR. Arable planned to kill him but his little daughter Fern stopped him. Therefore Wilbur could alive at MR. Zuckerman's barn. One day he heard that MR. Zuckerman is going to kill him. So Wilbur asked for a help to all animals. Spider Charlotte had an idea to protect Wilbur from death. The idea was to make a letter on her web. She wrote words like 'terrific' and 'some pig'. By doing so Wilbur became famous and made to participate at the fail with Charlotte. At that time Charlotte was almost dead because she's too old. But after she made egg sac she wrote word 'humble' and died. So Wilbur could get a prize. MR. Zuckerman was proud of WIlbur and decided to never eat or sell wilbur. After WIlber came back to the barn, he looked after Charlotte's children with great care and love.
I think Charlotte and Wilbur's actions were only possible because of their intimate relationship.
By looking at these two characters, we are able to realize what true friendship actually means. I was impressed when Charlotte tried to help Wilbur and thought another people more than herself.

A young girl, a runt pig, and a unique spider embark on a unforgettable journey to keep Wilbur from the slaughterhouse

This book is about a little girl, a pig, and a spider who are all friends. The spider and the little girl try to save the life of the pig by having him do tricks and perform in front of people. The pig then wins the hearts of the whole town and is able to keep his life!

"It is not often that someone comes along who is a true friend and a good writer. Charlotte was both."

"If Wilbur is killed and his trough stands empty day after day, you'll grow so thin we can look right through your stomach and see objects on the other side".

There are no notices for this title yet.

Find it at FPL